WEDNESDAY: Time to plan our own Explanation Texts!

This week you have carried out research about dinosaurs for your Explanation Text so that you can explain why they are now extinct.

Step 1: Read through your research notes.

The first thing to do is to find your research notes, and read them through carefully. 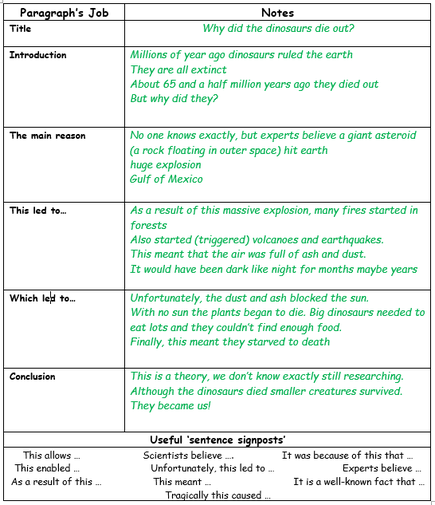 I’ve read through my notes and now, paragraph by paragraph, I’m going to write up these ideas as full sentences. I’ll write in green and in black I’ll put some notes - what I am thinking as I write these up.

The hardest part of the explanation text is going to be the middle three paragraphs - the part where one thing leads to another. I can use my sentence signposts to help, but it has to be said that this is a very advanced skill. Linking paragraphs, leading one thing to another in explanation texts or when you’re writing persuasive texts is a skill that is studied at university, when you write essays! So, don’t worry! The main mission of your explanation text is to explain why your animal is rare or extinct. If you do this with clever linking paragraphs - awesome! But if you have explained it with a slightly different structure - also awesome!

Where did the dinosaurs go?

Title - I’ve changed my title a little bit, because I have a plan how I’m going to answer this question in my conclusion!

Our planet used to be home to dinosaurs such as the dreadful Tyrannosaurus Rex, the massive Brontosaurus and the armoured Stegosaurus. These huge and scaly creatures ruled the land, sea and the sky for millions of years. But then, about 65 million years ago, they disappeared. So, where did they go?

Introduction - I have made sure to cover 3 main points and then finish on a rhetorical question.

Many experts believe that the dinosaurs’ sudden extinction was due to an asteroid. Asteroids are large rocks the float through space and, 65 million years ago, scientist’s think that a large asteroid crashed into the earth. This crash was the cause for the dinosaur’s extinction.

My first paragraph introduces the start of the problem - the asteroid. I’ve made sure to explain what an asteroid is because it is a scientific term.

When the asteroid hit the earth, it caused a huge explosion. It created huge clouds of dust that filled the sky. It also caused forest fires to spring up around the world, these made lots of smoke, soot and ash. Finally, the power of the explosion was so big that it triggered earthquakes and volcanoes. These added even more dust and ash and smoke to the sky. Soon the sky was dark and the sun blocked out.

My second paragraph explains what happened when the asteroid hit the earth. The sentence opener ‘When’ was a great way to start it off. I’ve tried to include all the information I found in my research so it’s a slightly longer paragraph.

As a result of this there was no sunlight and without sunlight most of the plants died out. Without plants the herbivorous dinosaurs (plant eater) had no food to eat and as they died out the carnivorous dinosaurs (meat eaters) also lost their food supply. Unfortunately, it took many months for the sky to clear, and all the dinosaurs ran out of food. They became extinct.

In this paragraph I describe the final issue, the final reason that the dinosaurs become extinct. I’ve used some more scientific words and used brackets to make sure I explain what they mean.

This is a popular theory that many experts believe, but we cannot be completely sure this is what happened as it all took place so long ago. Although the dinosaurs died out some creatures, which were smaller and needed less food survived. They were the ancestors of today’s mammals and birds. So, to answer the question, where did the dinosaurs go, we could say that they turned into birds and are still with us today!

In my final paragraph I make sure I say that this is a ‘theory’ and we cannot be 100% sure. I’ve also made sure that I answer the question that I started with – my title.

As I’ve said above, explanation texts are one of the trickier styles of writing that we teach in school, so do your best and don’t worry!

If you do not manage to complete your first draft today, don't worry! You can finish it tomorrow!

Here is a simple Steps to Success to help you include a range of skills in your writing. 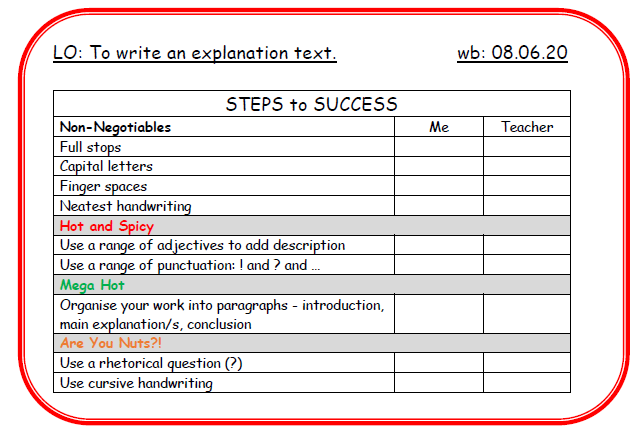 I have attached the Year 2 Model Text below. Please use this for support if needed. You can use it to give you ideas for your own Explanation Text.